Making Films Together While Apart 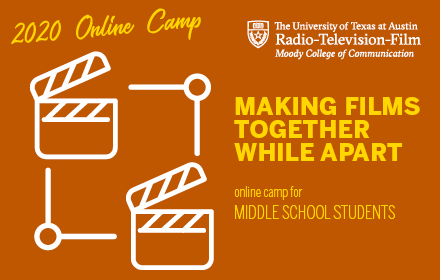 Films are typically made alone by one person with no outside help. Right?... WRONG. Filmmaking isn’t a solitary process. It’s a team effort. It’s working together. It’s collaboration.

But how do we collaborate with others right now, when we can’t physically be on a film set or around others for an extended period of time? Well, luckily, filmmaking isn’t just one thing. Filmmaking is also versatile. It’s also fluid. It’s also problem-solving.

So, let’s solve that problem. Let’s find a way to collaborate, learn together, and make films as a group, while apart. That’s where this camp comes in...

In this two-week camp, we’ll focus on two main objectives. First, we’ll introduce and build core filmmaking skills through daily exercises, exploring such topics as storytelling, screenwriting, cinematography, sound, and editing. Then second, we’ll utilize those new skills and create a collective short film where everyone contributes a piece to the puzzle.

How are we going to make a film together when we’re not in the same place as one other? That’s where the creativity comes in. Sounds like a fun problem to solve. Right?... RIGHT.

So let’s collaborate. Let’s solve problems. Let’s try something new. Let’s learn from our mistakes and then try again. Let’s make a rewarding film and show it off to our friends and family. Put simply, let’s make films together (while apart). And let’s have fun while we do it.

Register for Session 1 by June 14

Register for Session 2 by July 10

Note: we will both send out a survey and hold an orientation and tech support appointments online before the start of camp to make sure you are all prepared.

Camera (one of the following):

Currently pursuing her MFA in film and video production at UT Austin, Emily is a filmmaker who lives and works in her hometown of Austin, Texas. She studied Political Science at the College of William and Mary and worked in environmental education and conservation before her love of film and non-fiction storytelling took her to Duke University's Center for Documentary Studies.

Freelancing in reality tv and documentary film ever since, Emily is drawn to stories of motivation, change, and hope.

Having moved frequently as a child, Hope is fascinated by the myriad of ways that people and places differ and the strange ways in which they are startlingly similar. After graduating from Old Dominion University with a double major in Sociology & Communications, she launched herself into the freelance world. Embracing a jack-of-all-trades mentality, she has worked in all aspects of production. While pursuing her MFA in film and video production at UT, she has been exploring how unique stories can still reflect universal human experiences.