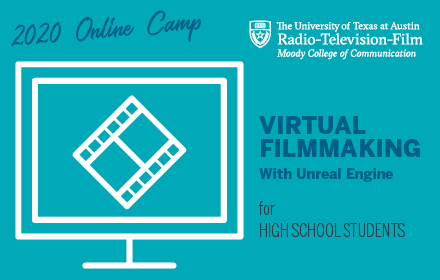 "Real-Time Virtual Production Is Saving Hollywood During the Lockdown"- Indiewire.

Across all budget levels of the industry, from previsualization to final export, virtual production technology is changing the way we conceptualize and create content.

Teen filmmakers and photographers, join us this summer in a virtual creative playground and unlock the game-changing creative potential of virtual production! Geared towards those with a minimum of intermediate-level experience in filmmaking or photography, this camp will allow you to plan, do layout, light, animate, and render cinematic ideas, concepts, and art in real-time using Unreal Engine. Physically accurate cameras will simulate their real-world counterparts and give you the ability to hone your real-world skills in a virtual environment.

We will edit still images into an "animatic" and add some minimal sound design. The end product will be 1-2 min. scenes based on any of the following that you choose:
1) a scene from your own pre-existing script
2) a new, experimental piece that you make from scratch
3) a script provided for you that you can use as a template for playing with at least five-camera set-ups