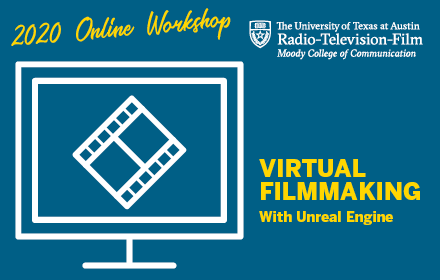 "Real-Time Virtual Production Is Saving Hollywood During the Lockdown"- Indiewire.

Across all budget levels of the industry, from previsualization to final export, virtual production technology is changing the way we conceptualize and create content.

Filmmakers and photographers, join us this summer in a virtual creative playground! Even with productions on hold, you can continue to develop your projects; translate your vision to crews, clients, and other stakeholders; and pre-visualize your work using real-time rendering in Unreal Engine.

This course is geared towards those with a minimum of intermediate-level experience in filmmaking or photography, and is perfect for media makers who are planning their next big project. You will apply your skills to the world of virtual production where using cutting-edge technology and techniques, you will test out settings and combinations that reflect with a high degree of accuracy and fidelity those of actual cameras, lenses, and lights. You will create fully accurate pre-vizualizations, simulating real-world shooting environments and rendered in high fidelity in real-time. This method of virtual pre-viz is rapidly becoming an industry standard for production processes, even for low-budget productions; mastering it will not only support your own work but also provide you a useful marketable skill.

You will create fully accurate pre-vizualizations, simulating real-world shooting environments and rendered in high fidelity in real-time. We will then edit these rendered still images into an "animatic" and add some minimal sound design. The end product will be 1-2 min. scenes based on any of the following that you choose:

1) a scene from your own pre-existing script
2) a new, experimental piece that you make from scratch
3) a script provided for you which you can use as a template for playing with at least five-camera set-ups

You will leave the course with a completely finished piece, an understanding of Unreal Engine as it pertains to virtual production - and the confidence to go forward and continue to work creatively on your vision before the cameras start rolling again!