Associate Professor in the School of Chinese, University of Hong Kong
Song will talk on the role of television in China in cultural governance and global positioning.

With an over one billion-strong domestic audience and growing transnational influence and accessibility, Chinese television has become a new symbol and carrier of China’s soft power in an era of increasing global connectivity and is playing a prominent role in cultural governance within the country. In line with the global trend of digitalization and the rapid convergence of delivery platforms, it is now increasingly difficult to define the boundaries of “television” in China. At the same time, the resilience of state control over and the social engineering function of Chinese television makes China a special case in the study of global television.  The study of China will contribute to the mapping of television and its cultural politics in today’s globalized and digitalized era. Borrowing Foucault’s concept of governmentality, this paper regards (post-)television, or rather, televisuality, as an effective and dynamic medium of communication and explores the roles it has played in the formation of postsocialist Chinese subjects.

Geng Song is Associate Professor in the School of Chinese, University of Hong Kong. He has written extensively on issues such as men and masculinities in China, Chinese television and Chinese nationalism. Among his publications are The Fragile Scholar: Power and Masculinity in Chinese Culture (HKUP, 2004); Men and Masculinities in Contemporary China (co-author, Brill, 2014); Chinese Television in the Twenty-First Century (co-editor, Routledge, 2015); The Sound of Salt Forming: Short Stories by the Post-80s Generation in China (co-editor, Hawaii UP, 2016); The Cosmopolitan Dream: Transnational Chinese Masculinities in a Global Age (co-editor, HKUP, 2018) as well as a number of articles in such journals as Modern China, The China Journal, and Asian Studies Review. He co-edits a book series on “Transnational Asian Masculinities” for Hong Kong University Press. He is currently working on a project on gender politics and nationalism in Chinese television. 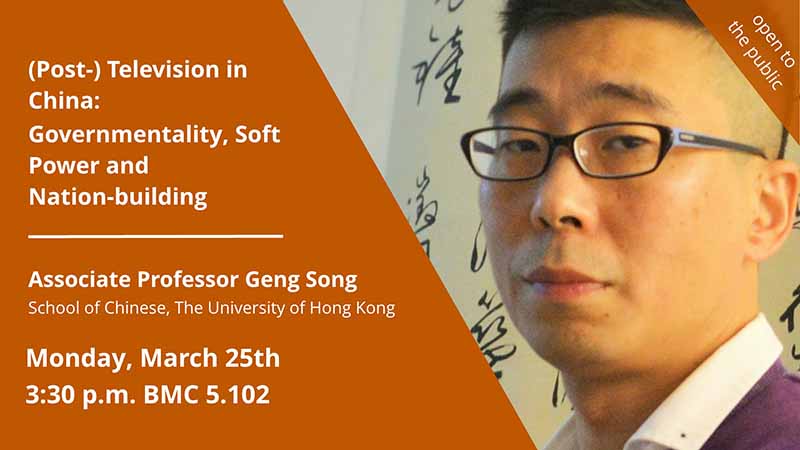