Postdoctoral Fellow in American Music at the University of Texas at Austin
Dienstfrey will discuss ways in which industry leaders have exploited technical regulations.

The Time the Telephone Company Broke the Talkies

In the 1930s, the newly formed Academy of Motion Pictures Arts and Sciences did something puzzling. It implemented an industry-wide technical standard—nicknamed “Academy Mono”—that dramatically impaired the sound quality for all talking pictures. Why exactly industry leaders thought such impairments were a good idea remains unclear. At the time, the Academy claimed that its standard would correct the problems with sub-par sound systems, and thereby improve the reproduction of films in smaller theaters. My presentation, however, provides a different explanation. Drawing upon studio contracts, court filings, FCC reports, and the surviving correspondence of audio engineers, I argue that studios adopted the technical standard in order to kneecap the Hollywood office of AT&T. In the years leading up to Academy Mono’s creation, the telephone company had been widely accused of “throttling” films and extorting exhibitors into installing AT&T-licensed loudspeakers. The solution to this power grab was to implement acoustical restrictions that undercut AT&T’s equipment advantages and weakened the company’s stranglehold on the industry. This presentation, in turn, reconsiders the value of technical standards within media industries. Contrary to scholarship that sees standardization as a means to bolster cooperation and efficiency, I contend that industry leaders exploit technical regulations in order to restrict competition, consolidate power, and maximize profits. In other words, standards are designed to benefit those in power, often at the expense of aesthetic quality and intra-industry cooperation.

Eric Dienstfrey is a Postdoctoral Fellow in American Music at the University of Texas at Austin. His research on media sound technology has been published in Film History, Music and the Moving Image, and the Journal for Cinema and Media Studies (forthcoming). His article “The Myth of the Speakers: A Reexamination of Dolby History” received the 2017 Katherine Singer Kovács Award from the Society for Cinema and Media Studies. 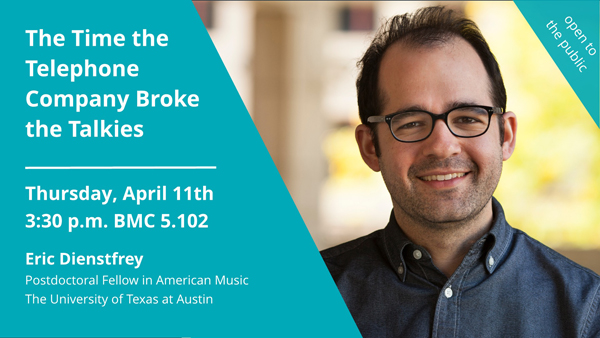