Hector Amaya, Professor, Department of Media Studies, University of Virginia; Member of the Institute for Advanced Study at Princeton University
Amaya will discuss public anonymity in the Mexican blogosphere.

Public Anonymity in the Mexican Blogosphere

The rules of participating in the Mexican blogosphere have changed because of violence. To remain safe, bloggers, including the makers of El Blog del Narco, have resorted to anonymity. This presentation analyzes this celebrated anonymous Mexican blog in relation both to the uses and misuses of anonymity and the connections between anonymity, displacement, and technology. Anonymity enables participation in the Mexican public sphere. Yet, I show, a public sphere based on anonymity is fraught and often disintegrating.

Bio
Hector Amaya is Professor of Media Studies at University of Virginia and a Member of the Institute for Advanced Study at Princeton University. He writes on Latino media studies, transnationalism, the cultural production of political identities, and Latin American film/media. In addition to publishing roughly twenty articles, he has single-authored two books: Screening Cuba: Film Criticism as Political Performance During the Cold War (2010: U. of Illinois P.) and Citizenship Excess: Latinos/as, Media, and the Nation (2013: NYUP). His third book, Trafficking: The Violent Restructuring of Publicity in Mexico and the United States, is forthcoming with Duke UP. 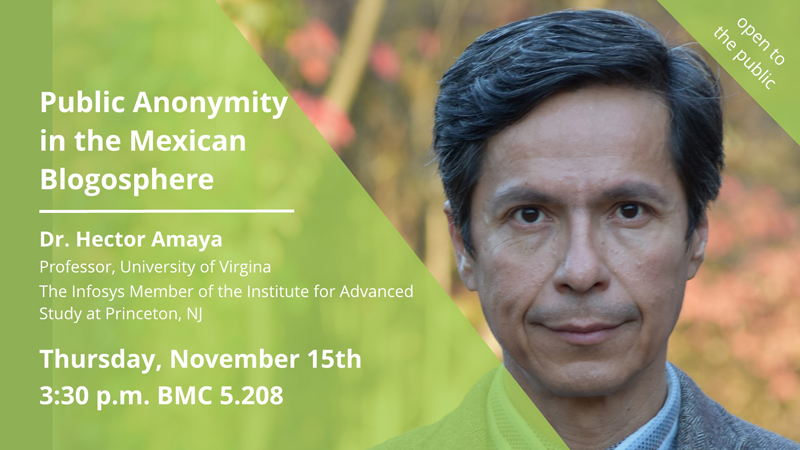