Last summer, Department of Radio-Television-Film and Wofford Denius UTLA Center for Entertainment and Media Studies alumnus Andrew Dismukes (B.S. ’17) performed at the Just for Laughs Comedy Festival in Montreal, Canada, with an eight-minute set at an “industry show” for those in the comedy business. A manager noticed Dismukes’ talent, contacted him a few days later in Los Angeles to discuss business opportunities and signed Dismukes as a client. While hustling standup gigs in California, his new manager contacted him about a chance to write for Saturday Night Live.

“I was asked to audition in New York City and it’s a different process depending on the person’s approach whether they do sketches or characters and my strength is standup,” said Dismukes, a 22-year-old native of Port Neches, Texas. “On the first audition, you go into the studio on the main stage and it’s empty except for three older guys in the seats including Lorne Michaels. It’s intimidating. You can hear the lack of laughter in your head.”

Following a second audition in front of a larger group of staff, Dismukes was offered a contract for the season, which runs from September to May.

“I didn’t know that writers at SNL produce their own sketches. You go to costuming, set design, the camera department, and even make decisions on who to cast,” said Dismukes. “Every week is a new show and you don’t have time to do it by committee. You’re responsible for it so that gives you a certain degree of freedom but the inverse is that you’re also responsible if it bombs.”

“Go out, be practical and make things for yourself. After you bomb hundreds of times, you lose the fear of failure.”

According to Dismukes, a typical schedule for the about 10 cast members and 15 writers employed by Saturday Night Live includes the following:

While in Austin, Dismukes launched his standup career in the fall of 2012, when he was a freshman in the Moody College of Communication. His first set was at a coffee shop in East Austin named Cenote during an open mic. He went on to host a weekly comedy show named “Chortle Portal” in the Taos Coop near campus and studied screenwriting in his upper-division film courses. His final semester at The University of Texas at Austin included participation in the semester-long UTLA program at the Wofford Denius UTLA Center for Media and Entertainment Studies, where he interned in script development while pursuing standup and introducing himself to the comedy scene in Los Angeles.

“I learned a lot at UT. Tom Schatz’s narrative strategies class made me think of film in a different way by exploring the storytelling process through visual and auditory elements and it stuck with me,” said Dismukes. “The screenwriting workshops really help prepare you for the writers’ room environment through revising, giving notes on other people’s scripts and by collaborating on projects.”

To succeed in the entertainment field, Dismukes advises students to build a network of people who have mutual connections. “I got into the Montreal festival because a friend recommended me,” said Dismukes, who was runner-up for the “funniest person in Austin” in 2016.

A week in the life 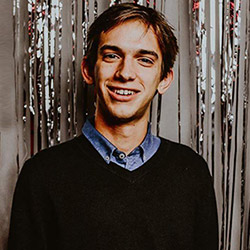 We all come in and have a topical meeting. We talk news and pop culture. For instance—with the Superbowl coming up—we have ideas for that. Monday is kind of resetting yourself for the week and getting your creative juices flowing. We also go to Lorne Michaels’ office and meet the guest host for the week and pitch sketch ideas to them. It’s very intimidating and risky and if you pitch bombs, you’re in front of everyone so it can be scary. This week we had Will Ferrell. So, of course, everyone is thinking, “Please, laugh at my sketch idea, Will Ferrell!”

You’re up all night writing sketches well into Wednesday morning.

We do a table read where everyone reads the sketches out loud and we all see how everyone reacts and how much people laugh. By Wednesday night, 15 sketches are chosen for rehearsal.

We rehearse the sketches and film the ones on Friday we want completed for the taped segments.

We do a run-through and finalize the edits on the bits we filmed on Friday. There’s a dress rehearsal at 8 p.m. and a live show at 11:30 p.m. Three sketches get cut between the dress rehearsal and the live taping.