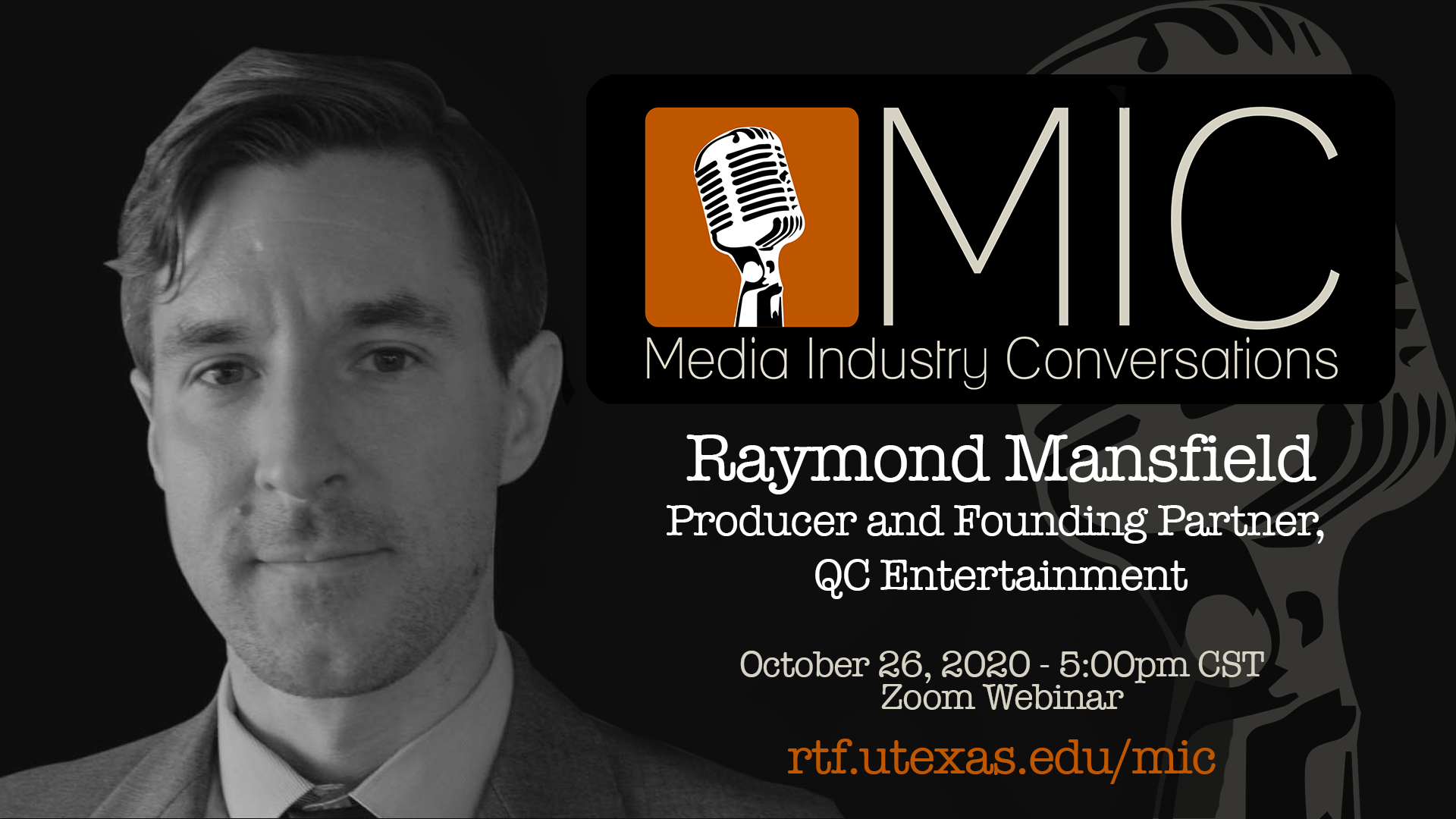 Please join us for a Q&A session where we discuss Ray Mansfield (RTF BS, '00)’s career trajectory, his roles and responsibilities as Partner for QC Entertainment, and his views on the current state of film financing, production, and distribution.

Raymind Mansfield is a veteran producer and a founding partner of QC Entertainment. Mansfield’s passion for storytelling has led him to a 20-year career dedicated to shepherding a diverse array of filmmaker-driven films. Mansfield has been integrally involved in all aspects of film production, from financing to development, packaging, on-set production, and sales and distribution.

Since launching in 2015, QC -- standing for Quality Control -- has quickly become a go-to company for producing and financing distinct, entertaining and socially relevant director-driven films. QC Entertainment are the Academy Award nominated producers behind two of the most talked about recent films – Get Out and BlacKkKlansman. Involved in every step of the way from development to production to release, both films led to back to back Academy Award Best Picture nominations and Academy Award winning screenplays for the producers along with being critical and commercial successes.

Mansfield also recently served as Executive Producer on “The Wrong Missy,” a broad comedy co-produced with Adam Sandler’s Happy Madison Productions. Since its May 2020 release, the film is among the Top 10 Netflix films of all time with over 59 million subscribers watching in the first 28 days of release.

Mansfield also served as producer on QC’s The Oath, which marked Ike Barinholtz’s feature directorial debut based on his original screenplay. The film starred Barinholtz and Tiffany Haddish and featured an ensemble cast including Nora Dunn, Jon Barinhotz, Carrie Brownstein and John Cho. The film was selected by the Library of Congress for their 2018 National Film Registry, "for purposes of preservation in the national collection...to benefit the culture of the United States of America." In addition, he served as producer on QC’s feature Time Freak directed by Andrew Bowler. The film starred Asa Butterfield and Sophie Turner, and was adapted from Bowler’s Academy Award® nominated short film of the same name.

Mansfield served as Executive Producer on Jordan Peele’s feature directorial debut Get Out, which QC developed, produced and financed from the initial pitch through its successful release. The acclaimed film became a global box office smash, culminating with Peele winning an Academy Award® for Best Original Screenplay, and Academy Award® nominations for Best Picture, Best Director, and Best Actor for Daniel Kaluuya.

Other QC projects include Zoe Lister-Jones’ directorial debut, Band Aid, starring Lister-Jones, Adam Pally and Fred Armisen. QC financed and produced the film which was led by an all-female production crew and premiered at the 2017 Sundance Film Festival in the U.S. Dramatic Competition section; Pride & Prejudice & Zombies, written and directed by Burr Steers, a fresh twist on Jane Austen’s classic, released by Screen Gems in 2016; and A Futile & Stupid Gesture, directed by David Wain and starring Will Forte, Domhnall Gleeson and Joel McHale, which was released by Netflix following its World Premiere at the 2018 Sundance Film Festival.

Prior to QC, Mansfield was Co-Founder & Co-President of Movie Package Company (MPC), a packaging/finance/production company with a focus on the business aspects of filmmaking, structuring risk mitigated investment opportunities for financiers interested in the field of entertainment. Over the course of his career, Mansfield has raised over $250 million for film “packaging”: development, production and distribution financing which included structuring numerous finance models, and negotiated worldwide distribution deals, intellectual property deals, and above-the-line talent deals.