UPDATED: SCMS 2020 CONFERENCE HAS BEEN CANCELED

Due to public health concerns, the 2020 Conference for the Society for Cinema and Media Studies has been canceled. Please read below about the recent accomplishments of our media studies scholars. 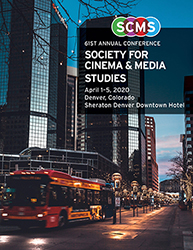 For film, television, and media scholars, the annual conference hosted by the Society for Cinema and Media Studies (SCMS) is one of the biggest scholarly events of the year. This year in Denver, RTF faculty, students and alumni will present their latest research, engage in critical dialogues on media studies topics, and network with regarded cinema and media scholars from around the world. Many of those scholars are listed below.

We have a lot to celebrate this year, including the following:

A partial list (below) reflects RTF affiliates who were originally scheduled to participate in this year's conference.