“For those interested in the secret origin of how Hollywood got super-powers, Perren and Steirer reveal all." - Comic book artist and illustrator Amanda Conner.

From Sam Raimi’s Spiderman in 2002 to 2021’s Black Widow, comic book movies have dominated the entertainment narrative for the better part of two decades. In their new book, The American Comic Book Industry and Hollywood (BFI, Bloomsbury Publishing, 2021), RTF Associate Professor Alisa Perren and co-writer Gregory Steirer explore the evolving relationship between the American comic book industry and Hollywood, and how the convergence of these media industries has shaped business practices in both areas. 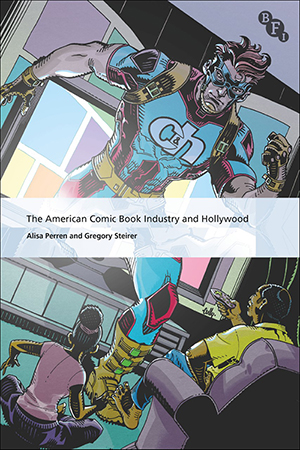 Intrigued by how cultural conversations and “taste communities” influence the American entertainment industry at large, Perren has been tracking Hollywood trends over decades—from pivots in labor practices and professional roles to shifts in the content we consume. Her current inquiry into the intersection of comics and Hollywood follows on the heels of research laid out in her book Indie, Inc.: Miramax and the Transformation of Hollywood in the 1990s (University of Texas Press, 2012) on how the late twentieth century independent film movement influenced mainstream media industries.

Unlike co-author Greg Steirer, Perren did not grow up on a diet of comics. However, she was able to witness first-hand how the comics industry and Hollywood interact when her partner, comic book artist Cully Hamner, sold his original property, Red, to be made into a film starring Bruce Willis. The process was eye-opening and started her on the path to her current research.

Historically, Hollywood tastemakers tended to treat comic books and their creators as inferior. In fact, artists and writers often omitted details of their comic book careers in order to secure “legitimate” positions in Hollywood. So, why, in the 21st century, are we seeing such a momentous integration into mainstream entertainment of what was once niche IP from the comic book/graphic novels publishing world? According to Perren, there are several factors, including:

Perren also notes that besides this shift in content, the integration of publishers, comics workers, and IP with Hollywood has generated an increase in the role of many other industry professionals involved in brokering these specialized deals, including agencies, managers, and attorneys. However, many labor issues have yet to be resolved: according to Perren, Hollywood is writer-focused, and visual artists who may have been equally responsible in the development of comic books and graphic novels often do not receive the same rights and opportunities that the writers do when it comes to both IP sales and Hollywood deals.

While addressing the outsize impact of franchises like Marvel Cinematic Universe and The Walking Dead, the book also shines a light on smaller companies which have been developing both publishing arms and production studios. One such example is BOOM! Studios, whose founder and CEO Ross Richie (an RTF alum) Perren interviewed for the book. BOOM! publishes comic books, market tests them with audiences, and then, when it makes sense to do so, develops them into films and TV series. A recent such example is BRZRKR, a co-creation of A-list Hollywood star Keanu Reeves with co-writer Matt Kindt (Folklords, Bang!), artist Ron Garney (Wolverine, Captain America), colorist Bill Crabtree (BPRD), and letterer Clem Robins (Hellboy).

As part of the Global Media Industries Speaker Series, Dr. Perren will discuss her book on Thursday, October 28, 2021, in a talk, “More Than Just Superhero Stories: The Rise of the Hybrid Publisher-Studio” (3:30 pm CDT, DMC 5.208 and over Zoom). There will be a reception on the lawn outside DMC after the talk.