Bita Ghassemi, a recent graduate from the Department of Radio-Television-Film, has been named to the Class of 2020 Schwarzman Scholars, a prestigious graduate fellowship at Schwarzman College in Tsinghua University in Beijing.

Ghassemi is among 147 scholars chosen from more than 2,800 applicants. The class is comprised of students from 38 countries and 119 universities. She will enroll in August 2019. 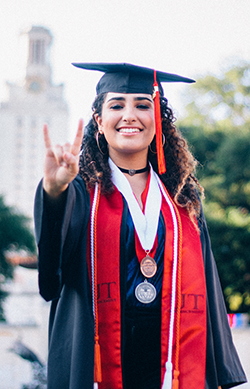 During her time at The University of Texas at Austin, Ghassemi created Farsi-language short films and worked to increase awareness for Iranian people and culture.

Where is your hometown?
Austin, Texas

What is your major(s) and when did you graduate?
Radio-Television-Film, Minor in German
Graduated as the Outstanding Scholar, May 2018

When did you first hear about the Schwarzman fellowship? Why did you apply?
I found the program through a Google search. I was researching graduate scholarships abroad. I loved the mission of the program and what it offered, so I applied. This was the only graduate program I applied for.

What does winning a Schwarzman scholarship mean for you? What will it enable you to do?
I worked extremely hard in undergraduate to have a shot at a fully-funded master’s program. Getting the Schwarzman Scholarship means everything I did was worthwhile. The program is so distinguished, and I’m very excited to have been given the opportunity to experience something this unique.

Who was the first person you told when you heard you’d been selected? What was their reaction?
I received the acceptance email at work. I saw the email notification on my phone, read the first sentence and gasped. My coworkers knew I was waiting on the decision and immediately knew what I meant when I said, “I got it!” The entire office stopped what they were doing and started clapping!

What are you most looking forward to about studying there?
Learning the language and culture and understanding how their history shapes their art today. I’m also very interested in what media people like to consume.

What drew you to your major(s) and fields of study?
Filmmaking gives me the ability to combine my love of many different artforms, my desire to tell stories from unique perspectives and my interests in business and global film markets.

What’s your favorite memory from your time at UT?
Getting chosen to screen my Farsi-language short film, Maryam Joon, at SXSW as part of the UT Denius Showcase.

What have you been doing since you graduated from UT?
I work for Austin Film Festival. I am the Production Manager and produce the film festival’s television show, On Story. The show airs on PBS and we recently won our second Lone Star Emmy!

What are your goals for the future and your professional life?
I hope to continue learning more languages, cultures and live in more countries. Professionally, I hope to direct and produce feature films and understand the global market well enough to sell and distribute my films to audiences all around the world.