Among all the races scattered across the political landscape for the midterm elections on Nov. 6, arguably the hottest is for the U.S. Senate seat pitting El Paso native and Democrat Beto O’Rourke against incumbent Texas Republican Senator Ted Cruz.

Covering the contest is veteran Department of Radio-Television-Film Lecturer Steve Mims, whose newest release on the subject is titled “Run Like the Devil.” After 44 screenings in 20 cities, Mims released the 59-minute documentary free of charge on Oct. 22 for online streaming on Vimeo in the days leading up to the election.

“Our goal is to get this film out to the public before the election to help people understand the two candidates and the ideas they represent,” said Mims, who has taught in the Moody College of Communication off and on since 1988. “The response to our theatrical screenings has been great and we hope to reach a huge audience online.”

The film premiered at the Austin Film Society Cinema on Sept. 6 and has screened in dozens of cities across Texas and the nation including at The University of Texas at Austin’s Belo Center for New Media on Oct. 10. Mims said the goal of his film is to paint a clear picture of both candidates.

“We’ve worked hard to make the film as balanced and accurate as we can,” said Mims. 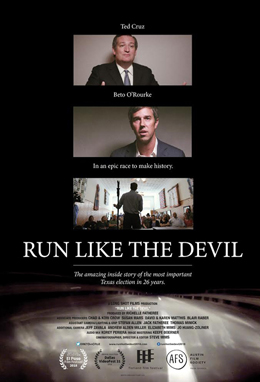 The contest has sparked national interest with a recent skit on Saturday Night Live and celebrities such as Ellen Degeneres and Jimmy Kimmel weighing in on the race. Following a jab at Cruz on his late-night show, Kimmel even accepted a challenge by the senator and flew to Houston to play a one-on-one charity basketball game last summer.

“People are really engaged right now,” said Mims. “The political climate is intense and people are agitated but I never wanted that to be the focus.”

The film includes an overview of Texas politics, lengthy interviews with both candidates, biographies of their lives, archival news and campaign footage and a spotlight on the political stances of both pertaining to current issues.

“My hope is to get everyone who’s interested in the race to learn more and see the film,” said Mims.

Early on, Mims said he could see the race would have broad appeal and began the task of documenting the candidates two years ago, first filming protests at the State Capitol and later during O’Rourke’s announcement to run on March 31, 2017. O'Rourke would go on to visit all 254 counties in Texas.

Citing what Mims called a lack of coverage from the 2012 U.S. Senate election in which Cruz defeated Democrat Paul Sadler by 16 points, Mims said he wanted voters to be more informed on the candidates and their views.

“There just wasn’t a lot of information in that race and it was my desire to paint an in-depth picture of both the candidates so viewers could understand what’s going on,” said Mims, who currently teaches a narrative production class. “With much of the news coverage there’s a focus on negative ads, polls and sensationalism. I wanted to make something that had a different perspective.”

While Cruz and O’Rourke appear to have many differences, the film highlights how the pair actually have several similarities. Both candidates are comparable in age, educated at Ivy League institutions and were very close and influenced by their fathers but represent separate ends of the political spectrum.

“They are opposites in just about everything else,” said Mims. “Learning the factors that led to their differences in ideology is a part of the film I wanted to explore.”

Initially attracted to O’Rourke’s longshot story, Mims said he trained his eye on keeping the film honest to both candidates with equal time spent on each and by avoiding cheap shots and hyperbole.

“Both of them have embarrassing things that could be brought up but they’re inconsequential to the issues,” said Mims. “I didn’t think it fair to focus on those aspects.”

After the election on Nov. 6, Mims plans on following up on the film to explore the results of the race. He will be filming in El Paso at the O’Rourke headquarters while he has a team filming at the Cruz headquarters in Houston.

“People are very passionate about this election,” said Mims. “It will be a nice way to update the documentary and wrap things up.”

View the trailer above or on YouTube or visit Vimeo for the full-length film.

From the Writers' Room