Flames of Feminism: A Conversation with Filmmaker Lizzie Borden 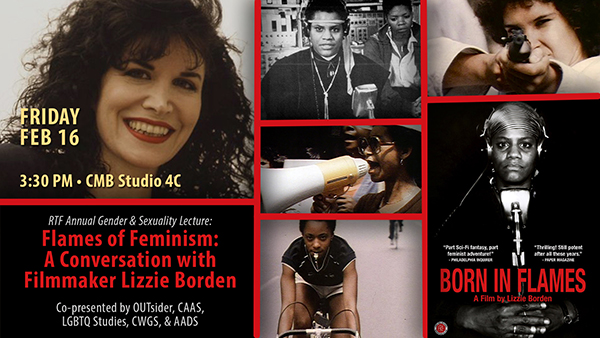 Considered a classic of radical agit-prop cinema, Born in Flames (Lizzie Borden, 1983) is an experimental flick of feminist fury that delivers a rousing rebel cry aimed at the intertwined forces of racism, homophobia and misogyny. A dystopic tale of a future United States in which feminist (and mostly woc) insurgents must rise against the fascist patriarchs who rule them, Flames could not seem more prophetic or urgently relevant thirty-five years later. Join UT Assistant Professor PJ Raval (RTF) in conversation with director Lizzie Borden as they discuss radical feminism, agit-prop aesthetics and Flames remarkable role as a harbinger of today’s queer, third wave and intersectional politics.

Note: Born in Flames will be screening 7:30pm at the VORTEX as part of the OUTsider festival.

In her first act of rebellion, at age eleven, Lizzie Borden adopted the name of the infamous 19th century patricide-matricide. She studied art at Wellesley College, moved to New York City in the 70s, wrote criticism for the prestigious Art Forum magazine, worked on her own paintings, and then shifted to experimental filmmaking after seeing a retrospective of works by Jean-Luc Godard. Her films have dealt with themes of race, class, power, capitalism, and sex—including Sundance Special Jury Prize winner Working Girls (1986) and Born in Flames (1983), named one of "The Most Important 50 Independent Films" by Filmmaker magazine.