Our Image, Our Stories

Dr. Mary Beltrán's "Latino TV: A History" is the first book on Latino/a participation and representation in US English-language television.

Note: This piece was written by Mari Estrada, RTF alum and administrative assistant for the Moody College of Communication’s Latino Media Arts and Studies Program.

In recent years, conversations surrounding representation and inclusion have dominated media discourse. Thankfully, we have started to see growth and investment in the narratives of marginalized identities, but there is still a long way to go. With the U.S. Latino population in particular, our significant growth as a market has yet to be properly acknowledged within the television landscape. The only way we can productively move forward in the fight for representation is to acknowledge and really know where we’ve been. Luckily, there is a brand-new work that can help us on this journey. 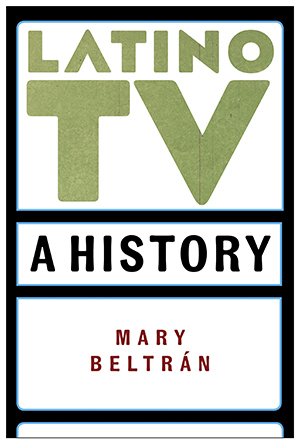 RTF Associate Professor Dr. Mary Beltrán’s new book, Latino TV: A History, breathes life into the history of U.S. English-language television, many aspects of which may not even be known to us Latinos. Covering seven decades of Latina/o television within the United States, Beltrán seeks to analyze and contextualize the construction of the Latino image and voice and its evolution. Beltrán documents this expansive and often overlooked history through interviews with industry professionals, archival research, and narrative analysis which paints a fuller picture of how Latinos have fit into the U.S. cultural narrative.

From TV Westerns of the 1950’s all the way to the wave of Latina-made series of the 2010’s, Beltrán delves into this complex landscape and unearths truths and experiences that give recognition to the “cultural citizenship” that can be lacked by so many Latinos in the U.S.

To get a further glimpse into Beltrán’s process and point of view, I asked her a few questions:

What inspired you to take on the immense task of documenting US Latino television history?

I’ve been curious about the questions that drive this research for a really long time; I remember beginning to ask them in a television studies course that I took with Horace Newcomb as a PhD student, maybe in 2000?  The immensity of really digging into this topic was daunting, however, and I set it aside. Over the years, I kept waiting for someone else to write that book. Finally, I decided that I couldn’t wait any longer, and that I wanted to take this on. I also realized that if I wanted to interview media professionals who had worked on the older series that I wanted to shed light on, that the time to talk with them was now, as they’re still alive and able to talk about their experiences.

Was there anything surprising you found in your research and analysis regarding efforts in representation/inclusion of Latino narratives?

I wasn’t exactly surprised, but I was always very moved by the stories I heard from Latina and Latino actors and writers that I interviewed, about the unwelcoming and demoralizing climate that they faced working in television in the 1960s, 1970s, 1980s, and at times also in the 1990s. They had to be so determined and resilient, to come back day after day, in those years especially.

The Latino identity encompasses a variety of facets and diversity in and of itself. How has this translated in the television landscape throughout the eras of your study? Has it translated?

I found that specificity about Latino national origin groups and intersectional Latino identities is very new on commercial television, aside from some attention to Mexican American cultural identity. Even in the 2000s, Latino show runners were pushed by broadcast and cable networks to present a fairly generic Latino identity, as it was thought at those networks that this was the only way to try to appeal to all Latino viewers and perhaps also appeal to non-Latino viewers. It’s really been in the last decade that U.S. networks and streaming platforms have provided space at times for Latina and Latino TV storytellers to depict Latinxs in a more nuanced and intersectional fashion.

I’d personally like to know if you have a favorite show out of the many you have delved into in this book. Were there any shows or programs you (and possibly all of us) did not even know about?

I have a soft spot for the very first Mexican American family drama, a bilingual series that was produced and aired locally on the public television network in Los Angeles in 1967, “Canción de la Raza.” It aimed to focus on real-life issues that families and young people were thinking about and dealing with in the Los Angeles area at the time, like the high school blowouts, the rising Chicano movement, and police brutality. However, only one episode has survived, unfortunately! It was exciting to get to interview an actor who got his start on this show and learn more about what an experiment it was for the television station, which had no Latino employees at the time that some of the staff decided to try to bring in community members to work with them on the series.