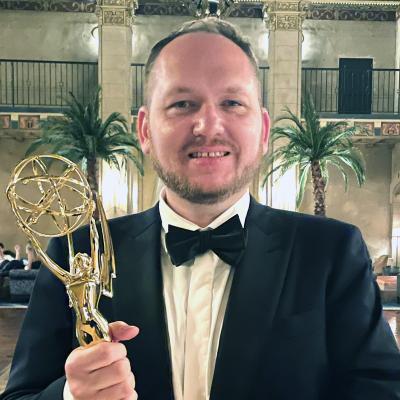 In 2022 Korey Pereira was awarded a Primetime Emmy for his sound editing work on Stranger Things 4. He is an active member of the Television Academy of Arts and Sciences and in 2021 he was elected to the Motion Picture Sound Editors' Board of Directors.

In addition to Stranger Things, credits include films from both Richard Linklater and Robert Rodriguez as well as reality TV shows like Shipping Wars, Law & Order, My 600-lb Life, and Fixer Upper: Welcome Home.

A full list of credits can be found on IMDB.

Korey earned a B.S. in Radio-Television-Film from the University of Texas at Austin. After graduation, Korey has remained involved with the department by mixing end-of-semester student films and in 2018 joined the faculty as a Lecturer.

2011 - B.S. in Radio-Television-Film, The University of Texas at Austin