Since the early 1980s, cuts in funding for public universities across the nation have led to increases in tuition (and student loan interest payments...) while these institutions struggle to perform their duties, maintain elite reputations, and provide affordable access. 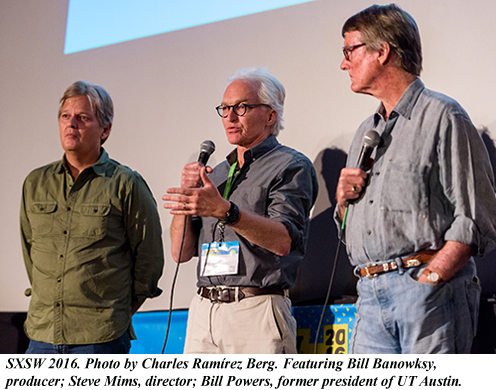 This is according to Department of Radio-Television-Film Lecturer Steve Mims, who in 2012 began traveling the country to understand what has resulted from higher education reforms sought after by state government legislators, boards of regents, and the university administrators tasked to implement them. His 95-minute documentary “Starving the Beast: The Battle to Disrupt and Reform America’s Public Universities,” is based on Mims’ findings and premiered at the 2016 South by Southwest (SXSW) film festival on March 13. The film is on a shortlist for a possible Academy Award nomination and is currently on the film festival circuit, with the next Austin-based screening scheduled for Friday, Sept. 16 at Violet Crown Cinema.

“The film is about the philosophical shift from viewing investment in education as a social good to a more libertarian, free-market system where costs should be predominately borne by the student,” said Mims.

Mims and producer Bill Banowsky (JD ’93) traveled to North Carolina, Virginia, Wisconsin, Iowa, Louisiana and throughout Texas to interview subjects and investigate a national phenomenon of elite public universities coming to grips with the demands of budget cuts during times of both financial burden and success. The reductions are compounded with increased numbers of students to serve, rising costs associated with aging infrastructure, new facilities, and the demands of instructional and research technologies.

“I want the film to compare two critiques of higher education. One is as a public good of social mobility that molds a student into a responsible citizen who is more likely to make more money, vote or make a difference,” said Mims. “The other compares an economic return on the value of higher education as a commodity or consumer good.”

A major concept discussed in the film is one of “disruptive innovation,” which presumably transforms traditional, expensive products or services into more affordable and accessible means. The term is usually referenced in regards to the effects of technology on consumer goods such as cathode ray tube televisions becoming obsolete through LCD flat screen versions or digital film replacing rolls of film emulsion.

Critics of the disruptive innovation model of higher education claim that despite such advances as the Internet and its use as a teaching tool, it falls short as a replacement to interacting with faculty experts, mentors, peers and benefitting from such other campus amenities as career services, student advising or technical services.

“Higher education is more of an experience than it is a product but much like advancements in products such as cars, there are more varied and useful services people have come to expect,” said Mims. “The traditional thinking was the state makes an investment in the people of the state, and the people will turn around and make an investment back into the state.”

Mims said the documentary has attracted national and international attention due to the huge problems stemming from student debt and the question of why higher education has become so expensive.

“There’s a vague attitude that indicts students themselves or that schools are taking advantage of them by accepting federal loans, which fails to account for the history of what has happened since 1980,” said Mims. “The film asks us to account for our priorities and where we invest our money. I want to let the people in the film do the talking and let the film speak for itself.”

“No film better exposes the coordinated assault on public higher education that’s going on right now across the country.” – The Huffington Post.

“…it contains big insights…helps lay the groundwork for debates over whether our universities should be designed to broadly increase society’s capacity for reason and insight, or should have their productivity monitored moment-by-moment by people who believe that 'everything can be measured in dollars.'” – The Hollywood Reporter.

“Lays out with calm, terrifying clarity how US public universities are being turned into profit-making ventures at the expense of students and education.” – FlickFilosopher, MaryAnn Johanso

“…'Starving the Beast' makes all too clear, what happened to public higher education in America was no accident. Instead, it was one of the most ingenious and nefarious elements of a long-term right-wing assault on the public sphere.” —Andrew O’Hehir, salon.com

“Richly detailed…Gets to the heart of what some have called the battle for America's soul. . . Provides invaluable reference material for newcomers to the subject.” —Jennie Kermode, Eye For Film