EVENTS: The UT RTF department will commemorate our 50th Anniversary with various activities featuring many of the initiatives listed below, including the 2015 Longhorn Denius Showcase of student films (held for the first time in partnership with the Austin Film Festival, November 1, 2015), the UT3D Open House (April 5, 2016), and the Flow Conference (September 15-17, 2016), which promotes scholarly discourse on the changing landscape of contemporary media.

Fifty years ago, back in 1965, when we filmed motion pictures with WWII field cameras on celluloid and cut them together with razors and tape on Moviolas, the University of Texas at Austin launched the Department of Radio-Television-Film. 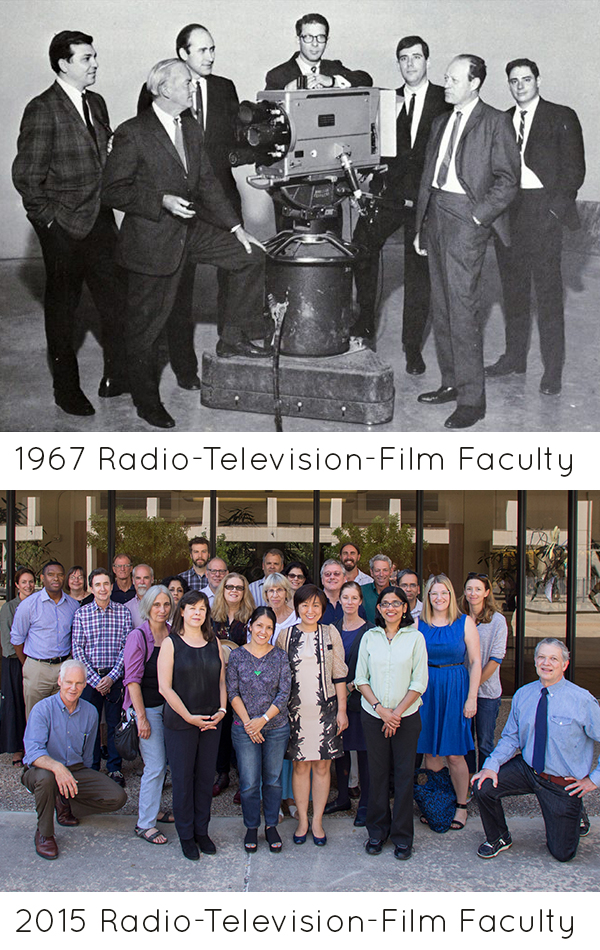 A lot has changed in fifty years. (See photos to the right!)

Today’s RTF program still embodies the fiercely independent spirit for which Texas is known. We stand for creative freedom built on rigorous scholarship.

The most affordable top-tier U.S. program in both the cinematic arts and the academic study of media, we offer a diverse community of 1000 undergraduate and 150 graduate students a comprehensive media education, unmatched among our peer institutions for the depth of our curriculum — a blend of hands-on, real-world opportunities for developing the crafts of cinematic storytelling with the critical examination of the historical, cultural, and global contexts in which media impacts our 21st century world.

Even as our alumni have been garnering major recognition and carving new careers in all areas of the media industries, we’ve been shaking things up here at home, expanding and emboldening our curriculum to better prepare our students to lead the next generation of media innovations.

As RTF reflects on where we've been over the past half-century and—together with our community of alumni, faculty, students, and supporters—where we will steer the next fifty years, this Golden Anniversary marks a golden opportunity to reimagine media education and to lead the nation in transforming the future landscape of the industry. As UT’s motto declares: What Starts Here Changes the World. Stay tuned as we co-create the next exciting episode!