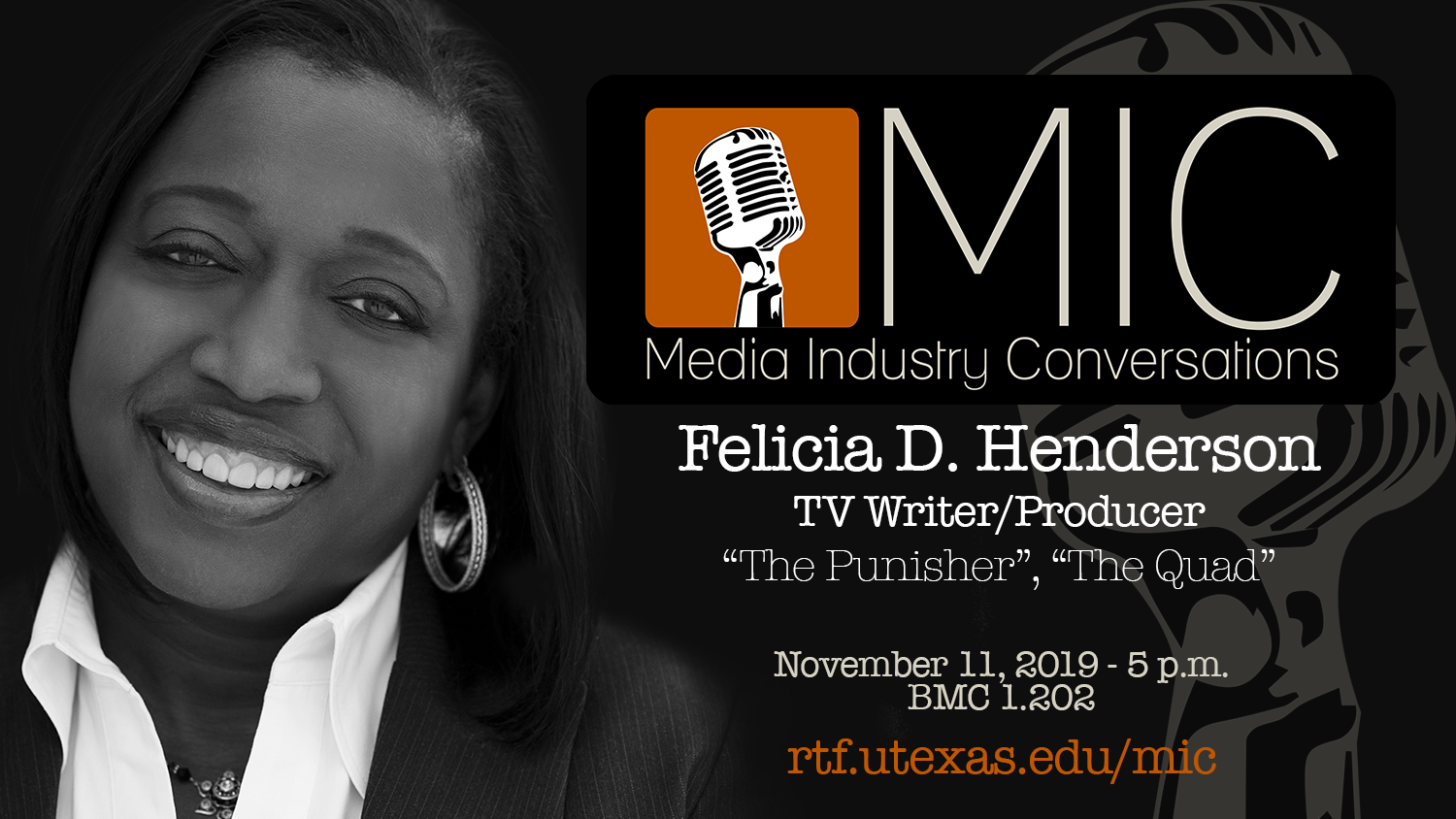 Felicia D. Henderson will discuss her career trajectory, her roles and responsibilities as TV writer/producer for The Quad, The Punisher, and Empire, and her views on the current state of the television industry.

FELICIA D. HENDERSON is the award-winning creator of the landmark Showtime Network hit SOUL FOOD: THE SERIES, television’s first multi-season drama featuring African Americans.  In 2018, through her production company, WaterWalk Entertainment, Inc., she signed a three-year creative development contract with 20th Century Fox to create television comedies and dramas.  Under this deal, she will Executive Produce three television series for the Fox network during the 2020-2021 season; and another for Netflix.  Last season, she was a consulting producer on Fox’s EMPIRE.  Currently, she is a consulting producer on NEXT, an FBI cyber-crime drama set to premiere on Fox in March 2020.

Ms. Henderson Co-Created and Executive Produced of THE QUAD, a one-hour drama for BET Networks which starred Tony Award-winners Anika Noni Rose and Ruben Santiago-Hudson and was named one of the “Top 15 Shows to Watch” by The New York Times in 2017.  She also co- executive produced the Netflix adaptation of Marvel’s THE PUNISHER, which debuted in Fall

The successful writer-director-producer also executive produced SINGLE LADIES and REED BETWEEN THE LINES for BET Networks.  She has written and co-executive produced high-profile shows such as GOSSIP GIRL, FRINGE and EVERYBODY HATES CHRIS. Additional credits include: SISTER SISTER, MOESHA, FAMILY MATTERS, and THE FRESH PRINCE OF BEL AIR.

After beginning her writing career in sitcoms, Ms. Henderson turned her attention to television drama writing and received three NAACP Best Drama Awards for SOUL FOOD; a Gracie Allen Award for her depiction of women; and a Prism Award for Accurate Depictions of Social Issues. She also garnered a Writers Guild of America (WGA) nomination for FRINGE and a Gracie Award for THE QUAD.

Having earned B.A. and M.F.A. degrees from UCLA, Ms. Henderson was honored with UCLA’s Tom Bradley Alumnus of the Year Award in 2014 and the UCLA School of Theater, Film and Television’s Alumni Achievement Award in 2010.  Continually in pursuit of knowledge, she is a Ph.D. candidate in Cinema and Media Studies at UCLA.  Her research interests include: culture, class, race, and gender issues in television writers’ rooms, political economics of the 2007 WGA strike, and the “othering” of single women in the media.  She has written chapters for two textbooks, and her critical essays have been published in some of the most prestigious academic journals in her field.

Ms. Henderson is proud to have been a juror for the 2019 Austin Film Festival Narrative Short Films Category and is a member of the Diversity Committee for the Sundance Screenwriters Lab. She is a trustee for the Humanitas Prize and mentor for the Humanitas Prize New Voices program.  She is a Diamond Life Member of Delta Sigma Theta Sorority, Inc. (a public service sorority); a board member of Dancing N.E.D. (a non-profit that raises funds for the treatment of women’s cancers); and an honorary board member of Los Angeles based Coalition for Restoring At-Risk Youth (a non-profit that provides social, mental, and medical care to at-risk and homeless youth). Most recently, she partnered with the San Gabriel Children’s Center in Los Angeles County to provide basic living and home supplies to boys who are aging out of foster care and moving into transitional housing.

Ms. Henderson was born and raised in Pasadena, CA, where she resides with Muffin, her four- legged human.